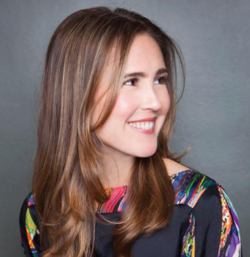 The idea of the secret is at the core of all I make.  My work has always been about a process of mystery and discovery as the hand engraved words are purposely not immediately evident, and many times magnification is necessary to decipher what circles a ring, or is inside a quince blossom.  I work in the speres of the mysterious and revelatory in the way that poetry values these qualities with words. My designs are artisanal, idiosyncratic, and very private.

The jewelry we go to every day, our 'favorites' are always endowed with emotional memory. We express who we are; our essential selves and what we stand for through these small choices. When I wear my Grandmother's ring I think of her every time I glance at it. The ring my husband gave me when my son was born never leaves my finger. Over the years many sources of inspiration have evolved for me in my work and life.  Right at this moment I am inspired by the art of Alexander Calder, Japonisme,  insects and butterfly wings in the gloaming. Films, nature, music, all of these muses conspire to engage and push me as a designer. Its up to me to pay attention.'' 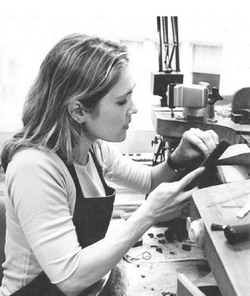 A pioneer in the arena of poetry-inscribed sterling jewelry, Jeanine Payer closed the doors of her 25-year-old business as of Jan. 1, 2014.

“Love is where the art starts, and I am at a place in my life where, as a mother of a six-year-old, I want to put my heart and soul into raising my son. I am not sure what the future will hold, and I am keeping the door open to possibilities regarding this work that I so love and to the poetry that inspires it. For the time, it is important for me to focus inward and on my family to create a space for future creative/artistic outlets.”

Jeanine grew up in California and made her initial creative connection with drawing and sculpture early in life. Raised around an eclectic cast of characters; young theatre artists, painters, dancers, set designers and writers, she remembers "sitting in the back of theaters while my mother rehearsed, working for hours on drawings and modeling clay tableaux.  I was obsessed with my improvised doll house--I loved creating small sets."

In the mid 80's Jeanine came to San Francisco where she studied sculpture in art school. Her intense interest in books and printed words began there. Working in a very small scale, the book form captured her creative imagination. The first jewelry pieces were inspired by the work of Joseph Cornell and photographs of children used so powerfully by Christian Boltansky along with the lush, emotionally charged autobiographical works by Frida Kahlo.

In art school, Jeanine discovered jewelry design as an organic extension of her passion for small scale sculptural work. The first collection was meticulously crafted with tiny images, antique French belt buckles, beads, hand painted antique ribbons and millinery bits, many from the renowned San Francisco atelier Bell'occhio.  Jeanine remembers, "My first designs were very ‘Mad Hatter meets Hieronymus Bosch'." The addition of the hand engraved poetry furthered the power and intimacy of the designs, with Payer feeling both inspired and driven to memorialize words through the engraving process when she read translations of the works of Rumi by the contemporary poet Robert Bly.

In 1989 the collection was discovered by Telaio, a key San Francisco specialty store, receiving instant and positive press recognition. Soon after, legendary general merchandising pioneer, Judy Collinson of Barney's New York, forged a long and important relationship with Jeanine and her work. "No department store of the 90's had the ‘cool' factor of Barney's, New York. I myself had never been to New York and had no idea of the impact that store carried, the tremendous and immediate exposure they would give my designs," Payer remembers. Other top specialty and fashion stores were soon to follow, including Liberty of London, Harvey Nichols, Ten Corso Como in Milan, Barney's Japan and L'eclaireur of Paris.  In the states a long relationship started with Twist in Portland, one of the best specialty stores in the country, known for its fine jewelry counter.  Payer's collection, with its pioneering combination of hand engraved poetry and contemporary design, created the beginning of the current trend of words on jewelry.

At the age of 23, Jeanine found herself in a warehouse in San Francisco's industrial area, a raw space just vacated by a young Liz Phair. She was living and working alongside a group of fine art photographers. It was an exciting time and one of great growth for her work as an artist. "…some of the work was highly complex; it was ‘horror and enchantment' wherever I turned, and we worked day and night without boundaries; we were forging a way for ourselves as artists and designers in the world."

In 1992 Jeanine moved her studio to San Francisco's jewelry hub, the historic Phelan Building.  Jeanine remembers, "There were jewelry masters all throughout the building. We had the caster two floors down, the stone cutter next door and a world famous jewelry design school upstairs ... one of the main jewelry supply companies was a neighbor; we were all together and it was a very special time to be there and to be in the jewelry trade.  And we all benefited from be working within this environment for so long."

The Jeanine Payer retail store opened in 2002 on the ground floor of the Phelan Building creating mutual synergy between workshop and retail store. In 2010 the company moved its workshops and offices to an old printing press building in the art and design destination of the city, historic Jackson Square.

Jeanine has been honored to work with some of the most important contemporary poets and translators in the country, and she also has incorporated work from the public domain to push her artistic vision. "Coleman Barks' new translations of Rumi are important to me because they connect with both the ancient and the contemporary; they are sensitive and strong all at once. Also, Stephen Mitchell's Tao Te Ching is incredibly beautiful.  It is such an honor to have been granted permission to use this work. To me poets are like rock stars.  I always get terribly nervous before approaching a poet to work with.  Yet poets are just the artists to appreciate having their work published, literally hand engraved into metal in limited quantities...It's always a wonderful and suprizing collaboration!  People choose the pieces they want to wear because of the message the design sends along with the words, and it is so personal, the work has to sing as a whole. I am always in the process of discovering ways to respect the words within the confines of a physical, sculpturally elegant design.  The poetry also creates an added texture, which for me is like adding color"  Payer's last collections focused on the works of contemporary Native American poet, Joy Harjo, as well as San Francisco Poet Laureate, Janice Mirikitani.  Over the years innumerable award winning poets of distinction have been included in the collections such as David Whyte, Jane Hirchfield and Naomi Shihab Nye.  In 2007 Payer created a capsule collection featuring Jane Alexander's poem presented at President Barak Obama's Presidential Inauguration

Over the last 25 years the collection has developed a loyal and distinguished following including numerous highly acclaimed artists, celebrities and luminaries from around the world.   Jeanine has made custom pieces for Mick Jagger, Seal, Meg Ryan, Russell Crowe, Debra Messing and Cindy Crawford among others.  Celebrities such as Mark Ruffalo, Kristin Wig, Julia Roberts and Orlando Bloom have shown up repeatedly in movies and editorial interviews wearing their personal JP pieces. This year Maya Angelou received the Blessing bracelet to honor her 80th birthday and Oprah Winfrey recently gifted Payer's custom bracelets to the young women in the first graduating class from her school in Africa.  Jessica Lang, Susan Sarrandon, Jamie Lee Curtis and Brad Pitt were among Jeanine's first collectors.  Payer's ardent following is a testament to the power of words and personal amulets that surround us today.